The Fire Department has a long and storied history that dates back to 1901. In 1991, William G. Martin passed away while still an active member. Bill, although in his 80's, was a 40-year member who was among the department's most active members. A department Trustee and Fire Police officer, Bill was at every department meeting and many calls helping to direct traffic and keep his fellow firefighters safe. Those firefighters included his son Terry, and grandsons Kevin and Brian, and nephew Steve Ingersoll.

His dedication and participation at such an advanced age touched and moved then town Supervisor John Kazanjian. With a reference to baseball great Lou Gehrig, who in the mid 1930's received the moniker "Iron Man" for playing in a record 2,130 consecutive games, the Town Board created the "Iron Man" award to give to a deserving member of each of the town's three volunteer fire departments annually. Bill was awarded the 1st Iron Man in 1991 posthumously.

Only two other members have received the award posthumously. John Hoffman, a 28-year member and past President who passed away suddenly after a long and courageous battle with diabetes, received the award in 2000. And 2008 Honoree Thomas C. Panzone was a 35-year member whose life was cut short by cancer. Tom was an avid cook and relished the time spent cooking for his fellow firefighters at meetings and special gatherings.

The Iron Man Award recognizes the volunteer firefighter who is ever ready, ever willing and ever present to serve the community. The recipient of this award has exemplified and outstanding dedication to service. The New Hartford Town Board recognizes the resolve, commitment and genuine enthusiasm of this individual as an inspiration to all.

Although Mike had only been a member for two months, there was a relationship that spanned nearly 15 years. Mike was a NYS Fire Instructor and taught many classes in New Hartford. He previously belonged to the Sherrill-Kenwood Vol. Fire Department where he was also employed as a Village Codes Officer. To honor Mike's love for firefighting and his dedication to teaching others, we dedicated our Firefighter of the Year award after Mike to honor his memory.

William V. Kelly Emergency Medical Technician of the Year
The Fire Department issues annual awards to recognize members who go "above and beyond" the call in their service to the Fire Department. One such award recognizes the "Emergency Medical Technician" (EMT) of the Year. Of the department's eleven hundred plus calls annually, over 75% are medical.

The award has been dedicated in the memory of William V. Kelly, a 39-year member who, in 1937, established what would become today's "Emergency Medical Service" (EMS). Bill was certainly ahead of his time when the American Red Cross trained him as an Instructor in First Aid. A representative from the American Red Cross in Washington D.C. came to the Utica Chapter and trained Bill and five others from the region. Not only did he train New Hartford firemen, but he also trained hundreds of Oneida County residents in the art of First Aid and emergency resuscitation.

Bill inspired many generations towards community and emergency service. His son's Jack and Fran both served at one time in the fire department. Fran rose to the rank of Deputy Chief before retiring. His wife Margaret and daughter Peggy Brady, both served in the Fire Department Ladies Auxiliary. Margaret was a Charter Member, helping to form the Auxiliary in 1953 and Peggy served as its President. 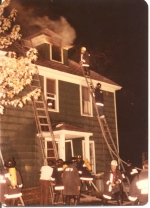 This site has been viewed 222,436 times.
Calls
News
Events
Pictures
Apparatus
Maintained by the members and staff of New Hartford Fire Department. Designated trademarks and brands are the property of their respective owners. Copyright © 2006-2022. YourFirstDue Inc. All Rights Reserved. Content on this web site is supplied by New Hartford Fire Department. YourFirstDue Inc. cannot be held responsible or liable for any content, text, pictures, or any other media found on this web site.
Management login
Powered by